The Mount Pinatubo Eruption of 2040 was a Deadly and Destructive Eruption in the Philippines during the early 2040s.

Nearly Fifty years after the last major Eruption of Pinatubo, the Volcano once again Exhibited signs of a Possible Eruption, with the first sign presenting itself in November 2047.

Luckily, in the Forty-Five to Fifty years since the last major Eruption of Pinatubo, Structures in the Vicinity of the Volcano had been Fortified incase the Eruption was as bad as the last one. 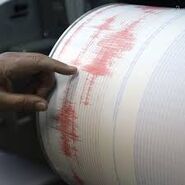 Several Quakes of up to 4.1 were detected in the days leading up to the Eruption

The Major eruption of Pinatubo occurring on September 1st, 2040

Ash from the Eruption
Add a photo to this gallery
Retrieved from "https://hypotheticalvolcanoes.fandom.com/wiki/Mount_Pinatubo_Eruption_of_2040?oldid=4355"
Community content is available under CC-BY-SA unless otherwise noted.